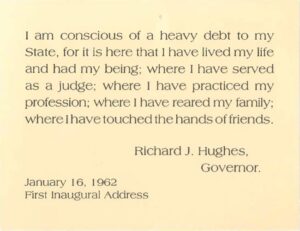 There comes a time in life, whether of a man or of the State itself, when there must be a pause for realistic appraisal of the future. I have just now taken the oath of office and have accepted the Great Seal of the State of New Jersey. In this solemn circumstance, while there is refreshment of the spirit in recalling the traditions and past achievements of a great State, there is, more significantly, the taking up of new strength for the challenges ahead.

We stand here in the presence of two distinguished former governors of New Jersey. Both Governor Meyner and Governor Driscoll have made invaluable contributions to our State and our society. For their achievements we salute them. The edifice of the future is more firmly built upon foundations of strength and character.

Here also with us are representatives of the other two branches of government. Their dedicated service is so necessary to the well-being of us all. These legislators and the Judiciary share with me the responsibility of serving the more than 6 million people of New Jersey with efficiency, with equity, with integrity.

Having taken an oath before Almighty God, I stand here in full awareness of my particular and heavy responsibility as Chief Executive of the State of New Jersey. I respect but do not shrink from the magnitude of the task before me. For as I stand before you today I sense, as I did during the long months of campaign, a new spirit, a new pride of the people.

It is this pride, tempered by the humility of an abiding trust in the Almighty, which convinces me of our ability as a people, together, to look with hope upon the sobering face of the modern world.

This determination of our people to master their future has been well demonstrated.

There is abrupt realism in the affirmative votes of a million New Jersey citizens on the referendum providing continuity of government in times of disaster, a preparation now for the eventuality of an atomic holocaust which is an unfortunate condition of our modern life.

There is the courage of adventure in the spirit which has brought us to the eve of an accommodation with our sister State of New York to provide a promising solution to the transportation problems of our metropolitan communities in conjunction with a great new World Trade Center.

There is the generosity of the Good Samaritan in the approval of our referendum for an institutional bond issue to care for our unfortunate fellow citizens.

There is the foresight of a prudent people, by their referendum vote last Fall, in providing Green Acres for generations to come.

It is this admixture of the realism, the generosity and the courage of the people of New Jersey which fortifies me as we take up the task ahead.

There was a period in history when the people of New Jersey seemed content with a state government negative in nature and limited in action. But in recent years a new philosophy, a new role of government, has begun to take shape—government unafraid to act in the people’s service.

Thus today there is rising in this capital city a complex of new state buildings symbolizing this new concept of government, this new pride of a people in their State.

There has been a quickened demand by the people for an efficient and effective management of their affairs, for we have moved from the days when the best government meant the least government. Good government today is one responsive to the needs of the people and the communities in which they live, not suffocating them with burdensome regulations, but providing an instrument for joint accomplishment. Good government looks beyond the powerful and the prosperous to achieve a healthy accommodation of the interests of all.

Good government is government with a sense of social justice, acting not as a patronizing busybody, but as a friend to the migrant laborer in his underprivileged status, the worker displaced by automation, the poultry farmer with his problem of overproduction, the Negro in search of a decent home—to mention but a few of the many—the all—for whom government truly exists. How can one begin to enumerate these categories? The commuter, the student, the taxpayer, the ill-housed, the aged, the small businessman—the list is endless.

But we must not forget that a viable economy is the foundation stone of such service. New Jersey has grown with America and I am determined that it shall set the pace for the economic progress of this nation. How does a modern state accomplish this? It seeks a fair and stable tax policy. It maintains a highly skilled labor force. It keeps its house in order and more, whether in law enforcement, in education, in transportation, in water policy, in all of the many components of a vital economy.

Today people look to their government not in fear, but in the hope and expectation with which they look upon a good neighbor to lend a helping hand when the pressures of modern life bear down heavily upon them.

This attitude represents a healthy change over that of fearful men who saw, and still see in every government service a threat to an ill-defined “freedom.” In our modern technological society the opposite is nearer the truth. Prudent participation of government in the affairs of men has brought an expansion of freedom for the vast majority of people. But having affirmed our faith in a government responsive to the people, let us retain a sensible scrutiny and check over those in government who bubble with enthusiasm to do everything for everybody.

Our problems in nearly every field arise from the inevitability of growth and the demands of progress. These problems, though difficult, are wholesome and capable of solution as contrasted with those which result from a resignation to decline and decay.

Our investment in New Jersey’s progress, our commitment to New Jersey’s growth, have required that for the first time in many years a governor will enter office with no binding pledges on tax policy save continuing every economy in government compatible with our obligations to the future. We shall not shirk these obligations of service to a modern and progressive State and I can but say that this Administration will do its full duty, measuring it carefully and providing for its cost.

The surest measure of government’s concern for the development of a State, as well as the personal growth of each individual citizen, is the support of its educational institutions. We have seen the enormous rise in the cost of education. Not only must we face this financial burden, but also provide for its more equitable distribution. This basic investment is imperative to prepare our children for the challenges and opportunities of the future and, indeed, to survive in the competitive world about us.

A new emphasis must be given to higher education. There is a pressing need for additional facilities, a pressure which fortunately has sparked a renewed quest for excellence. Our youth should be encouraged to seek the best education from which they, as individuals, can profit. And this profit not only accrues to the individual, but also to the State and to the Nation. For instance, as our economic development continues to include our many research centers, nurtured by our colleges and universities, we know that as they flourish so does our State’s economy prosper.

On another front, a balanced distribution of people, jobs and industries between our urban and suburban communities is essential for the revitalization of urban life and the orderly growth of suburban areas. We cannot stand by while the bright face of New Jersey is disfigured by decay of its cities and a haphazard growth of its suburbs. The proposed Department of Urban and Suburban Affairs, working closely with private groups, with communities and local officials, should bring a planned development and co-ordination to those communities. There must be a bold attack in the field of urban renewal, with its eradication of slums and the development of new homes and business. The rebirth of our cities and planned development of our suburbs are inseparable.

And, as man does not live by bread alone, so must the spirit and moral tone of the State be nourished. Thus a continuing emphasis must and will be given to vigorous law enforcement and judicial administration of the highest order. Only in this way can we maintain the integrity which has given our people a new sense of confidence in government. Law enforcement must stress highway safety and the taking of every necessary step for avoiding the unforgivable waste of human life on the highways. If the rigidity of this enforcement brings inconvenience, or even hardship, it is a price well worth the saving of so much as one life.

There is abroad in the State today a reawakening of the public spirit, a revival of the power of the people, a feeling of restless urgency to put aside the considerations of politics and to meet like men the destiny of the future. In full-hearted recognition of this temper of the times and, indeed, the demands of conscience, I look forward to a period of close cooperation with the Legislature. We must dedicate ourselves, in a single-minded concentration, to the solution of our many problems, however bitter and divisive, as free as possible of the distraction of partisan ambitions.

But in the hands of our fellow citizens will rest the final success or failure of this course. Together—each man giving his due—we must make our contribution to the common good by our respect for law, by an active interest and participation in public affairs, by a willingness to accept the cost of the many services required by the people of their State and local governments.

It is with a deep awareness of this obligation that I approach my part in the major tasks ahead.

While we are only men, yet with the help of God, whose ministers we are, let us act together in the interest of the State we love, to strengthen and protect the heritage we hold in hand for ourselves and for succeeding generations.