Jon S. Corzine was elected Governor of New Jersey on November 8, 2005, defeating Republican businessman and former state budget director Doug Forrester by a 53-44% margin. Inaugurated on January 17, 2006, Corzine served until January 19, 2010 when he was succeeded by Chris Christie.

The Governor Jon S. Corzine Archive, launched in June 2018, features a growing body of information about the Corzine administration including major speeches, reports, memos, press accounts and other material generated during the time as well as newly generated retrospective interviews, forums and analysis. The Center on the American Governor welcomes donations, suggestions, and corrections to make this archive as accurate, informative and useful as possible.

After serving one term in the U.S. Senate as a Senator from the State of New Jersey, Corzine was elected Governor of New Jersey on November 8, 2005, defeating Republican businessman, former Assistant State Treasurer and former Mayor of West Windsor Township Doug Forrester by a 54-43% margin. Corzine was inaugurated on January 17, 2006 and served until January 19, 2010, when he was succeeded by former U.S. Attorney Chris Christie.

A governor’s staff and cabinet are crucial to his or her success in office. Governor Corzine is particularly proud of the people he brought into his administration. As he said during a Center on the American Governor forum on his administration’s progressive accomplishments, “There’s nothing in my administration that I have a right to take credit for—other than the mistakes and failures because the people around this table and others of your colleagues did a remarkable job and I am extraordinarily grateful for those efforts.”

State Legislature During the Corzine Administration

Democrats controlled both houses of the New Jersey legislature through the entirety of Jon Corzine’s term as governor, though never with a veto-proof majority. When Corzine took office in 2006, Democrats had a four-seat majority in the State Senate (22-18) and a 18-seat edge in the Assembly (49-31). Those numbers did not change significantly in the 2008 election cycle, when Democrats lost one seat in the Assembly but gained one seat in the Senate. 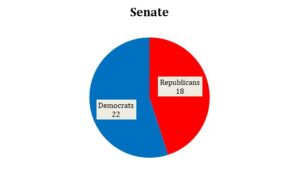 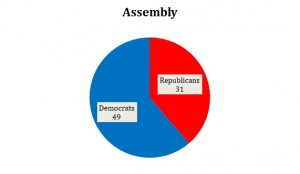 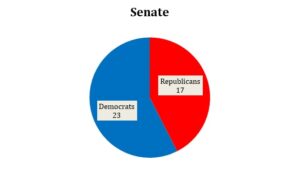 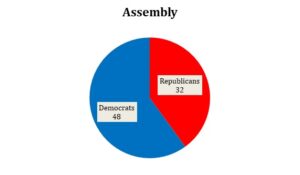 Click here for a list of all members of the New Jersey legislature during the years of the Corzine Administration.

The New Jersey governor is able to nominate new members to the Supreme Court when openings occur through resignation, death, or retirement. Once confirmed by the Senate, appointed justices initially serve a seven-year term after which they can be nominated for tenure by the sitting governor and, if reconfirmed by the State Senate, remain on the court until they reach the mandatory retirement age of 70.

Governor Corzine nominated two Supreme Court Justices during the course of his term as governor. In September 2006, with Chief Justice Deborah Poritz approaching age 70, Corzine announced that he would replace her by elevating current Justice James Zazzali–who was appointed by Governor Christine Todd Whitman (R) in 2000 and was himself 69 years old–to the Chief Justice seat. To replace Zazzali as a Justice, Corzine nominated Helen Hoens. The State Senate confirmed both Zazzali’s elevation and Hoens’s nomination on October 23, 2006, and each took the oath of office three days later.

On June 4, 2007, Zazzali himself reached the mandatory retirement age of 70. To replace him, Corzine nominated his former chief counsel and state attorney general Stuart Rabner to serve as Chief Justice. Rabner was confirmed on June 21, 2007 and took the oath of office on June 29, 2007.

Corzine also re-nominated three justices to a second term and tenure upon the conclusion of their initial seven-year terms. In 2006, Corzine renominated Justice Virginia Long, a Whitman nominee, to the bench. In December of the same year, he renominated Justice Jaynee LaVecchia, another Whitman nominee. Three years later, in May 2009, Corzine renominated Justice Barry Albin for a second term and tenure. Albin had originally been nominated to the court by Governor James McGreevey in 2002. The remaining two justices–John Wallace, Jr., and Roberto Rivero-Soto–were each nominated by Governor James McGreevey and did come up for renomination during Corzine’s term.

During his term in office, Governor Corzine issued a total of 167 executive orders, an average of about 41.75 per year. This was a dramatic increase over the rate at which New Jersey governors in the 1980s and 1990s issued such orders–Govenors Kean and Florio each averaged about 28 orders per year, while Governor Whitman issued an average of about 17.5. Governor Corzine’s rate is in line, however, with the governors immediately before and after him: Governors McGreevey and Codey combined to average 54.5 executive orders per year and Corzine’s successor, Governor Chris Christie, averaged 36.25. Of course, these numbers do not in any way quantify the relative import of actions implemented through individual or groups of these orders. In fact, as the chart shows, a high number of Corzine’s executive orders concerned the lowering of flags in New Jersey to half-staff, in large part due to the war in Iraq.

The Eagleton Center on the American Governor has convened roundtable forum discussions on the following topics related to the Corzine Administration. Governor Corzine, members of his staff and cabinet, and other interested observers have participated in each event. The events were videotaped and are available in our Video Library.

Additional information about Governor Corzine can be found at: