Woodrow Wilson and the Election of 1912

(Don Linky, former chief counsel and director of the Governor’s Office of Policy and Planning under Governor Brendan Byrne, wrote this analysis while he was a senior policy fellow at the Center on the American Governor from the program’s inception until 2011.) 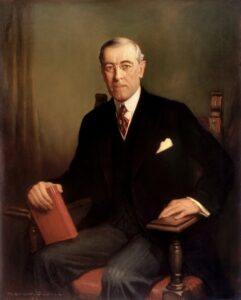 Woodrow Wilson was elected president in 1912 after serving only two years as governor of New Jersey. President of Princeton University from 1902 until his election as New Jersey governor, Wilson succeeded in his campaigns for both governor and president with significant aid from practical political organizers.

In the spring of 1910, Col. George Harvey, editor of Harper’s Weekly, persuaded James Smith of Newark, “boss” of the New Jersey Democratic Party, to support Wilson for the gubernatorial nomination. Wilson, who had recently lost an internal struggle at Princeton with one of his deans, agreed to accept the nomination if it were offered without conditions. Smith’s well-oiled machine worked perfectly, but his plan to elect a dignified puppet soon went awry. Wilson accepted the Democratic state convention’s nomination, aligned himself with the progressive forces that had been fighting Smith, and won in a landslide on Nov. 8, 1910. It was only the beginning of the revolution. Before his inauguration Wilson prevented Smith’s election to the United States Senate by the state legislature. Inaugurated on Jan. 17, 1911, the new governor maintained such heavy pressure on the legislature at Trenton that he won enactment of most of his program in one session: direct primaries; effective state regulations of public utilities; workmen’s compensation; municipal reform; and reorganization of the school system. In early 1913 he won the last of his important demands–antitrust legislation to drive industrial monopolies from New Jersey.

Wilson was aided in his presidential campaign by the division among the Democrats at their nominating convention and by the subsequent split in the Republican Party at its convention between its progressive and conservative factions backing the respective candidacies of the incumbent President William Howard Taft and former President Theodore Roosevelt.

Despite his academic image, Wilson also relied on key advisers skilled in practical politics, such as Edward “Colonel” House of Texas, who helped Wilson gain the backing at the Democratic Convention in Baltimore of William Jennings Bryan, the Democratic presidential nominee in 1896, 1900 and 1908. Wilson’s nomination came on the 46th ballot of the convention that followed a complex series of deals and shifting alliances. Wilson and Speaker of the House Champ Clark of Missouri split the early votes of the more progressive Democrats, with Congressman Oscar W. Underwood of Alabama supported by most Southern delegations and the moderate Governor Judson Harmon of Ohio backed by many party machine politicians. When New York City’s Tammany Hall forces shifted from Harmon to Clark, Colonel House helped to persuade the reluctant Bryan to throw his support to Wilson, slowing the move of delegates toward Clark. Wilson’s managers then reportedly made a series of promises to win additional votes, including offering cabinet positions to key leaders, that succeeded in Wilson gaining the lead on the twenty-eighth ballot and, as the former opposing forces rushed to join the Wilson camp, finally winning by near acclimation on on the forty-sixth ballot with 990 of the 1,089 possible delegate votes.

The split among Republicans occurred when former President Roosevelt challenged the nomination of his former Cabinet officer and hand-picked successor as president, William Howard Taft. Along with other more progressive Republican leaders, Roosevelt had split with Taft over his Administration’s policies, particularly the defense of business interests in maintaining high tariffs on imported goods and the failure to pursue Roosevelt’s conservation program in the West.

Roosevelt and Taft also disagreed over the judicial treatment of reform legislation such as that providing workers’ compensation for injuries on the job; in 1911, Roosevelt had suggested that court decisions might be subject to reversal through public referenda, a proposal that angered Taft, who had spent his earlier career as a lawyer and who would later serve as chief justice of the United States Supreme Court. Roosevelt won primaries in nine states that elected delegates, while Taft won only one election. But despite Roosevelt’s demonstrated popularity with rank-and-file Republican voters, Taft received the Republican nomination since only 42% of the delegates who attended the nominating convention had been selected through primary elections. The party leaders controlling the majority of delegates overwhelmingly preferred Taft’s conservative, pro-business leanings over Roosevelt’s more progressive positions seeking to curb business monopolies and improve workplace conditions. The leaders also were more comfortable with Taft’s personal style than with the independent, often cantankerous Roosevelt. When Taft was selected as the nominee, the progressive backers of Roosevelt marched out of the convention. They soon formed the Progressive Party, better known as the Bull Moose Party after Roosevelt’s boast that he “was as fit as a bull moose” to undertake another campaign. The Progressive platform supporting Rossevelt’s candidacy called for the direct election of U.S. senators, women’s suffrage, reduction of the tariff and various social reforms.

The 1912 election also featured the Socialist Party campaign headed by Eugene V. Debs. In the years prior to World War I, the Socialist Party had grown in strength, electing two members of Congress, over 70 mayors, and many state legislators and city councilors. The Socialist tally of slightly over 900,000 votes in 1912, about 6% of the total votes cast, was more than double the number voting for Debs in the 1908 election, reflecting the increasing strength of the left that placed resulting pressure on the major parties to advocate labor and social reforms to counter this trend.

Wilson campaigned on a program called the New Freedom, which stressed individualism and states’ rights. Roosevelt’s typically energetic campaign attacked both Wilson and Taft, but his domestic program was similar to Wilson’s appeal to working class voters. In an August campaign speech in New York City, he said, “The principles for which we stand are the principles of fair play and a square deal for every man and every woman in the United States”; the “square deal” label to his campaign later was adapted by subsequent politicians (e.g. “New Deal”; “Fair Deal”). Taft became the first President to actively campaign on his own behalf while in office, but it soon became clear that the real contest was between Wilson and Roosevelt.

On October 12, Roosevelt was shot upon arriving to give a speech in a Chicago hotel by an anarchist, William Schrenk. Clutching the wound in his chest, Roosevelt instructed his Secret Service agents who had grabbed the man, “Don’t hurt him! I want to look at him”, and then continued inside to give his speech, speaking for an hour before collapsing and being taken to the hospital. The thick papers for his speech that Roosevelt carried in his breast pocket had a bullet hole through them, apparently helping to slow the bullet enough to save Roosevelt’s life.

Wilson and Taft suspended their campaigns until after Roosevelt was released from the hospital, but during his recovery Roosevelt recognized that there was little chance in a victory with Republican votes split between him and Taft. On election day, Wilson received over 6 million votes, Roosevelt over 4 million, and Taft over 3 million. Wilson’s election made him only the second Democrat to win the presidency since the Civil War, a victory gained with only 42 percent of the popular vote. Despite being outpolled by the combined totals voting for Roosevelt and Taft, Wilson’s victory in the Electoral College was overwhelming with 435 electoral votes to 88 for Roosevelt. The incumbent Taft suffered a humiliating defeat, gaining only 8 electoral votes.

The President took Mr. Wilson by the arm and they both moved through the red room to the South porch where a score of photographers who had been granted permission had arranged their machines. These were both the photograph and moving picture variety.

As Mr. Taft walked through the red room he was stopped to don his overcoat & hat as Mr. Wilson still had his on and some little conversation was taking place between them.President Taft remarked that it was just four years ago that he and Roosevelt had had their pictures taken in the same identical place. Mr. Wilson made no reply to this more than to see [sic] “is that so”–So the two men stood on the same spot as it were that had been used by others under like circumstances for the purpose of being photographed. A very large number of pictures were made and the antics of the operators in their haste was really amusing. The two men were asked to toe a line that had been made on the porch by face powder taken from a vanity box of one of the operators who was a female of the interesting type. They were asked to shake hands which was readily granted, to face each other which was done by both without a flinch, asked to look this way and that and finally asked to look away from the cameras and operators entirely that a side view might be taken. It was at this time when about the first word was spoken by either during this picture taking performance.

The two men had moved mechanically in response to all the former requests but to this last request, coming as it did from the lady member of the party, Mr. Wilson turned toward her instead of looking away and remarked that they would much prefer to look toward the lady.

This brought a broad smile from all present and the picture taking episode ended with good feeling all around.