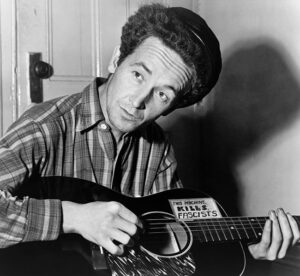 Woody Guthrie’s full name was Woodrow Wilson Guthrie. Born on July 14, 1912, the rambling musician, writer and activist’s 100th birthday was noted in 2012 with concerts, new recordings including several that set some of his writings to music for the first time, and other tributes and appraisals. It also led me to wonder why a couple, living in Okemah, Oklahoma, chose to name their son for the then-governor of New Jersey.

Had his parents been fans of William Howard Taft who was President at the time, the man who wrote “This Land Is Your Land” might be remembered as Billy or perhaps Howie. He could have been Lee Guthrie if they had looked that summer to their own Governor, a Democrat named Lee Cruce whose first major success, according to Wikipedia, was establishing Oklahoma’s Department of Highways. But, instead, they were drawn to the Governor working in Trenton, a state capital Mapquest calculates as 1,487 miles from their home in Okemah.*

While Woody’s father Charles was politically active and had been elected District County Clerk in Oklahoma, the names he and his wife Nora selected for their other children – Roy, Clara, George and Mary Josephine – had no known political associations. So why name their middle child for Wilson?

When Woody Guthrie was born on July 14, 1912, Woodrow Wilson had been Governor of New Jersey for less than two years but he had received some national notice as an effective, reform-minded, progressive leader. What must have elevated his name in the consciousness of the very expectant parents in Oklahoma, however, was the drama of the Democratic Party’s national convention that only 12 days earlier had selected Wilson as its Presidential nominee.

Held in Baltimore from June 25th through July 2nd, the frontrunner going into the convention among half a dozen announced candidates was the Speaker of the House of Representatives, Champ Clark from Missouri. Clark received 440 votes to Wilson’s second-place tally of 324 on the first ballot but, because Democratic party rules in 1912 required support from two-thirds of the delegates, Clark was well short of the 694 he needed to secure the nomination.

As voting continued in subsequent ballots, it seemed that Clark would get to the magic number and Wilson prepared a concession statement. But when Clark picked up New York City’s delegation controlled by Tammany Hall, it cost him the backing of William Jennings Bryan who until then had then been neutral. Bryan, still popular despite having been the party’s unsuccessful nominee in three of the previous four elections, endorsed Wilson in a speech that denounced Clark as a candidate of Wall Street. The speech helped move enough delegates so that eventually – on the 46th ballot – Wilson won the nomination.

When Charles and Nora Guthrie’s baby was born less than two weeks later, they named him Woodrow and gave him Wilson as a middle name. And now, more than 100 years later, that baby is known and celebrated around the world as Woody.

Wilson went on to be elected President in November with 42% of the popular vote and 82% of the electors, defeating President Taft and former President Theodore Roosevelt as well as Socialist Party candidate Eugene Debs and Eugene Chafin of the Prohibition Party, while his namesake began a life that would be defined by both incredible personal tragedy and lasting musical contributions and cultural influence.

Coincidentally coinciding with Guthrie’s centennial birthday in 2012 was the unlikely but oft-mentioned possibility that the hundred-year anniversary of that election in 1912 might also include an open, multi-balloted party convention. If indeed no candidate had wrapped up the Republican nomination before that August when the party convened in Tampa, perhaps the resulting excitement would have led some young 21st century parents to bring into the world a baby Mitt or Newt or Rick or Ron. Or, if history had truly repeated itself and a deadlocked convention had once again settled on the first-term Governor of New Jersey, perhaps we would have seen a spike that summer in the number of new babies named Christopher.

John Weingart, Associate Director of the Eagleton Institute of Politics, is also the host of Music You Can’t Hear On The Radio, New Jersey’s oldest folk music and bluegrass radio program. This column which has been slightly updated here was also posted in 2012 in the blog on the show website at http://veryseldom.com/ and appeared in Governors Journal on March 22, 2012.

*My sources for this far from exhaustive research are not only Wikipedia and Mapquest, but also Joe Klein’s wonderful 1980 biography, Woody Guthrie; A Life (Alfred A. Knopf); “Challenges of a New Century: Woodrow Wilson and the Progressive Era,” a chapter by John Milton Cooper, Jr in A Legacy of Leadership: Governors and American History, edited by Clayton McClure Brooks and published by the University of Pennsylvania Press in 2008; and an interesting piece of historical fiction called Memoirs of a Texan: Empire by Tim Murray, published by FastPencil.com.