Transcript excerpts from an interview with Raymond Bateman (NJ Senate President 1970-1972; 1977 Republican gubernatorial nominee) conducted for the Eagleton Center on the American Governor. The full interview is available in the Video Library. 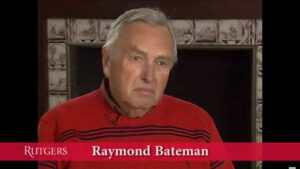 Q: What was wrong?

Raymond Bateman: I had endocarditis, which is an infection of the heart. And they saved my life there, but in the process two things happened: Webster Todd went into the Republican caucus and demanded that I be made assistant majority leader, in my first year and I wasn’t even there, and it happened, and then I went to the University of Pennsylvania hospital, about half way through my stay, Governor Hughes comes in to the same hospital for an eye operation, cataract– in those days that was not a simple operation, and he was up, of course, on the seventh floor and I was down on the first floor, and every afternoon at four o’clock Betty Hughes would come down with a wheelchair and take me up to the seventh floor and we’d drink martinis to six, and that’s how Dick Hughes and I became very fast friends.

Q: Webster Todd is the father of Christine Todd Whitman?

Q: And what enabled him to walk into the Senate in ’67?

Raymond Bateman: He was a good friend. He was state chairman then.

Q: What about Hughes?

Raymond Bateman: Yeah, we became very close. We did a lot together. We did a lot of substance things together. The one I remember the best was when Seton Hall came to the Governor and said, “You gotta buy our medical school because we’re losing our shirts on it,” and of course, this was tough for him, he was Roman Catholic, and in 1954 the Catholics had beat– had gone out because of their state med school and beat a state bond issue for a state med school. So you know there was a lot of tension around the subject, so Dick Hughes asked me to try to get everybody together to see if it could be done. I didn’t think it could be done, but I said, sure, I’ll do it, and about that time Mason Gross, from Rutgers , came to me and said, “I’ve got a plan.” And his plan was if you start, if you buy the Seton Hall Med School, which is now our biggest in Newark, if you buy that, and you start at the same time a medical school program at Rutgers, it’ll balance out and so, this was on a Wednesday, I’ll never forget it, because I got a meeting shortly thereafter. Wednesday night he and I went to Morven and talked to Dick Hughes and he said, it’s a deal, and it was a deal. They started a medical school program at Rutgers and bought Seton Hall Medical School , and therein lies one of the great mistakes I ever made in the legislature. Not the buying of it– there was a contest, will the medical school be moved to Newark or to Morristown, and the suburban legislators were all for Morristown and of course the big city people were for Newark . It was a hell of a fight and some of us, including me, caved in and said, go ahead, have it in Newark . And that’s-

Q: You think today’s problems at UNMDNJ spring from that?

Raymond Bateman: I would say that if UNMDNJ, or whatever it would have been, had been in Morristown and affiliated with those hospitals out there, it would be a roaring, major success today.

Q: Of the governors that you knew in those days, who was the best campaigner?

Raymond Bateman: Oh, Dick Hughes by a hundred miles. He was great. He’d campaign anywhere, anytime, street corners. He and I always kidded ourselves because he thought he was the only person who ever campaigned in Shellpile , New Jersey . Do you know where that is? It’s in Salem County on the Delaware River, and it’s just a pile of shells. But it’s Shellpile , New Jersey. And so I went down there just to tell him I’d campaigned there, too. He was a great campaigner. Meyner was not a particularly good campaigner. Bill Cahill was not a particularly good campaigner. Brendan became a good campaigner in his second [1977] campaign; he wasn’t particularly—he didn’t have to campaign, he had a boat ride. That was the first campaign in the United States after Watergate. First one. And we paid the price.