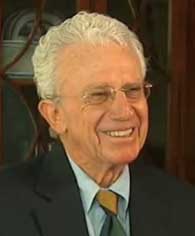 Transcript excerpt from an interview with Martin Greenberg (NJ State Senator and Judge of Superior Court) conducted for the Eagleton Center on the American Governor. The full interview is available in the Video Library.

Martin Greenberg: …I am reminded when I was the chairman of the Judiciary Committee and would meet with the Supreme Court and my committee to discuss proposed legislation that the Court might be interested in or rule changes that affected the Senate. I asked…Governor [Hughes] how he wanted me to refer to him in the presence of the other members of the Court, and also my committee, many of whom were attorneys but not all. And he said the protocol is to refer to an individual with the title that is affixed to the highest elective position he held. So he would be referred to as Governor Hughes and and I as Senator Greenberg. It was hard for me to accomplish that with the attorneys who appeared before me, they kept calling me judge. And I understand that.