Provided in collaboration with the Star-Ledger 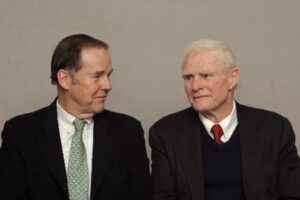 The Kean-Byrne Dialogue was an extraordinary series of bi-partisan conversations with former New Jersey governors Brendan Byrne (Democrat, 1974-1982) and Thomas Kean (Republican 1982-1990). Initiated by The Star-Ledger in 1995, transcriptions appeared in the paper on a biweekly basis until Governor Byrne’s passing on January 4, 2018. The two former governors covered major issues, events, proposals and personalities affecting New Jersey and the nation. Sometimes they agreed and other times not, but the tone was always civil and respectful.

In granting the column its Journalism Award in 1997, The Washington Monthly magazine wrote: “In monthly ‘conversations,’ the political adversaries and long-time friends take on pressing issues with the unusual perspective of commentators with experience…. Whatever the subject, careful thought and an insider’s knowledge make for original, provoking columns.”

The final entry in the series appeared on January 15, 2018, featuring Governor Kean reflecting on the series and his warm relationship with Governor Byrne.

The Center on the American Governor is proud to make this series more easily available. Governors Byrne and Kean provided a prominent reminder that members of both political parties can come together to discuss complex issues in a friendly manner, clarifying and perhaps bridging ideological and partisan divides to find positive solutions to today’s problems.

June 18 – What 2 ex-N.J. governors say about who will be the next gov; Comey, Russian probe

May 8 – What 2 ex-N.J. governors say about Trump’s tax plan and our property taxes

November 20 – What 2 ex-N.J. governors say President-elect Trump should do first

May 30 – Trump, Clinton are in danger of having lowest positive ratings in history

May 9 – Christie unlikely choice VP choice for Trump, but…

April 25 – Kean & Byrne: ‘Certainly looks like’ a contest between Clinton and Trump

October 19 – Kean & Byrne: Based on first debate, Hillary likely to be the Democratic candidate

August 17 – Kean & Byrne: NJ will never be able to pay public servants enough to ensure they will stay

June 29 – Kean & Byrne:  New Jersey will make its budget deadline — but it won’t be a good budget

June 1 – Kean & Byrne:  Pumping gas is “one of the few breaks NJ drivers get, and we ought to keep it”

May 18 – Kean & Byrne: Paying pro football teams may not be the best means of military recruiting

May 4 – Kean & Byrne: Searching for “meaningful hope” for those trapped in inner-city communities

April 6 – Kean & Byrne: If Menendez doesn’t resign, he must be wary of conflicts of interest on House votes

March 2 – Kean & Byrne: Will we ever fix the state’s pension problem?

January 19 – Kean & Byrne: State of State speech well delivered, but not one of Christie’s best speeches

October 13 – Repairing Hudson River tunnels and building another should be a top priority:  Kean & Byrne

May 19 – Raise the gas tax: Tom Kean and Brendan Byrne

May 5 – John Degnan is an excellent choice to lead the Port Authority: Brendan Byrne & Tom Kean

March 3 – Byrne and Kean predict no tax cuts … for now

December 23 – Ask the governors: For Christie, all issues are national

December 9 – Gov. Chris Christie off to a running start: Ask the governors

October 28 – Ask the governors: A year after Sandy, some still waiting

September 30 – Government by crisis: Whose fault is it?

September 02 – N.J. campaigns have stars (Christie, Booker) but no pizzazz

August 12 – Kean & Byrne: The state will be in good hands with Gov. Guadagno

July 01 – On the Inevitability of Gay Marriage in New Jersey

May 19 – Kean Byrne: Buono should consider dropping out of race

May 06 – Kean and Byrne: Is Romney event prelude to Chris Christie’s presidential run?

April 01 – Kean and Byrne: The importance of sand dunes and DEP rules

January 14 – Ask the governors: How have our national political parties changed?

December 31 – Ask the Governors: Can N.J. kick the can any farther down the road

December 17 – Ask the governors: Can New Jersey get what we need?

November 19 – Protecting against the next hurricane: Govs. Kean, Byrne weigh in

October 8 – The two governors discuss what Obama needs to do next, the youth vote, beach access and stepping away from the spotlight.

May 21 – The two former New Jersey governor’s discuss top issues of the day. Cost of government.

April 23 – The former New Jersey governors take on issues including leadership at Rutgers University, Mitt Romney’s potential running mate and the future of the presidential campaign.

January 16 – Governors Tom Kean and Brendan Byrne reflect on the late Assemblyman Alex DeCroce’s legacy, the prospect of a vote on an N.J. gay marriage bill, and other key issues.