Governors and the White House

In addition to the information below, also see: Governors and the Presidency: How They Campaign, How They Govern, by Walter Shapiro and Jill Lawrence, a report commissioned by the Eagleton Center on the American Governor in 2012. 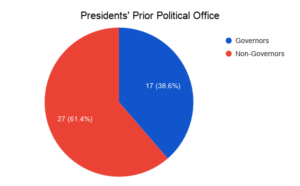 Of the 78 Americans who have served as President, Vice President or both since the nation was formed, 27 or just over one-third had been governor of a state. This includes 17 of the 44 presidents (39%) and 16 of the 48 vice presidents (33%).

Over the 58 national elections held to date, governors have captured a total of 55 presidential nominations. Twenty-seven were elected and, most recently with former Governor Romney’s defeat in 2012, 29 have lost. If the five third party candidates are discounted, however, one can say that 53% of the major party nominees who had been governors were victorious.

In all but 12 of the national elections, at least one governor has been on the November ballot as a presidential or vice presidential nominee. Two governors were on the ballot for 18 elections, and three nominated in two elections – 1912 and 1916.

Many other governors who sought the presidency or hoped for the vice presidency were not nominated. Some ran major national campaigns, while others hoped status as their state’s favorite son might lead to victory, and many more launched trial balloons that were little noticed and quickly punctured. 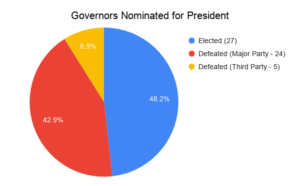 The 2020 primary race showed a different trend, however. Only four candidates with gubernatorial experience entered the Democratic primary: sitting Governors Steve Bullock (MT) and Jay Inslee (WA) and former Governors John Hickenlooper (CO) and Deval Patrick (MA). Bullock, Hickenlooper, and Inslee all withdrew from the race before the first primary, with Hickenlooper choosing instead to run for a U.S. Senate seat while Inslee will seek reelection as governor. Patrick entered the race in late 2019 and and announced he would end his campaign on February 12, 2020. Two former governors also announced they would run against incumbent President Donald Trump for the Republican nomination: Mark Sanford (SC) and Bill Weld (MA). Neither posed a serious threat to Trump, however. Finally, former Governor Lincoln Chafee (RI) announced that he would seek the Libertarian nomination. It appears that, for the second straight presidential election, neither major party will nominate a candidate with gubernatorial experience.

Since its founding in 1787, the United States has had 44 presidents and over 2,300 governors. While the paths to the White House have ranged from long careers in lower levels of politics to military backgrounds to only brief prior forays in the public domain, one of the most common prior experiences has been serving as a state’s governor. Seventeen presidents* (almost 40%) had previously held office as chief executive of a state, providing them with experience in running a government bureaucracy, dealing with a legislature and responding to the judiciary.

The first governor to win the White House, Thomas Jefferson from Virginia, was elected in 1800. The most recent, George W. Bush from Texas, won exactly 200 years later. While examining the 17 governors and 23 non-governors elected over that time yields no discernable pattern, potentially interesting observations can be advanced:

Governors Nominated But Defeated for President

Stated another way, sitting and former governors have received a party nomination and then lost the general election a total of 26 times. This includes 1848 and 1948, both years when two governors suffered this outcome; Martin Van Buren (NY) as a Free Soil candidate and Lewis Cass (MI Territory) running as the Democrat in 1848, and Thomas Dewey (NY) as the Republican nominee and Strom Thurmond (SC) running on the States’ Rights Dixiecrat ticket in 1948.

Two additional candidates who lost their bids for the presidency –DeWitt Clinton (NY) in 1812 and George McClellan (NJ) in 1864 – would later move on to be governor or their own states.

Over these 26 national defeats by 23 governors:

Governors Running for President: While in Office or Afterwards

It is common to see governors among those exploring possible candidacies. While many eventually opt not to run or fail to gain their party’s nomination, governors have captured a total of 55 presidential nominations. One or more has been on the November ballot for president or vice president in all but 12 of the country’s national election cycles.

Of the 43 presidents to date, 17 had experience as a governor before taking over the presidency. The first was Thomas Jefferson elected in 1800 and the most recent was George W. Bush, elected 200 years later.

More detailed information on governors in the White House is available here.

The remaining 13 governors were all elected president. Almost half of them – six of 13 – were serving as governor when they ran for and attained the White House. This includes:

The other seven sought the presidency after their gubernatorial term(s) had ended:

Governors and the Vice Presidency