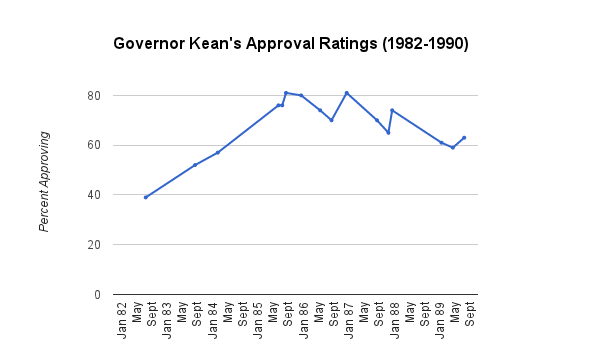 After winning the gubernatorial election in 1981 by a slim 1,797 votes, Governor Kean assumed the office in early January with a divided public. An early job approval poll taken just a few months into his first term in office reported that only about 40% of the public approved of his job thus far in office, and that many remained unsure of their new governor and what his administration promised. As the public grew to know Governor Kean and his program better, his job approval numbers steadily increased, exceeding 50% halfway through his first term and continuing to grow.

During the midterm legislative elections, Republicans (the Governor’s party) only lost a single seat in each chamber, which is below the average loss during the midterm elections. The Governor’s popularity continued to rise in the second half of his first term, as the public developed a strong respect and admiration for both the policies and politics of the Kean administration. As the 1985 gubernatorial election approached, few Democratic challengers were willing to challenge such a popular governor. When Peter Shapiro won the Democratic Primary in June of 1985, few people expected a close contest in the fall. When an October poll revealed Kean’s approval ratings reaching an unprecedendanted 79%, the election was all but conceded in the public eye. On November 5, Governor Kean won a tremendous victory; winning reelection by a 47% margin (71%-24%), capturing all but 3 of New Jersey’s 567 municipalities, and carrying 14 new Republicans into the General Assembly (giving the Republican Party its first majority in that chamber in over a decade).

In his second term, Governor Kean maintained his popularity, though it gradually decreased from its peak. The Governor, despite pushing a strong agenda that typically provokes a public backlash, was able to hold on to public approval for how he achieved his goals, as well as for what those goals were. In the middle of his second term, his Party was able to maintain control of the Assembly, although suffering the loss of eight members. Governor Kean left office in 1990 with approval ratings well over 60%, making him one of the most popular governors in New Jersey history.