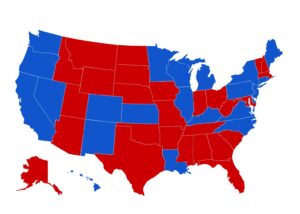 With that lone pickup, Republicans now hold 27 of the nation’s governorships, with Democrats holding 23.

Below are some fast facts about the nation’s 50 governors. 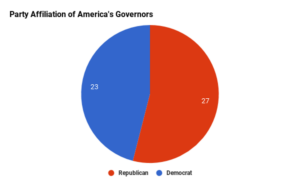 The Republican Party picked up one seat in the 2020 elections, in Montana. There are currently no Independent or third party governors in the U.S. 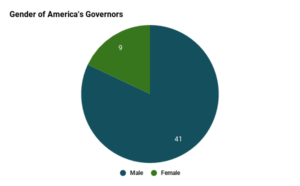 As of January 2021, nine of the nation’s governors are women: Kay Ivey (AL); Kim Reynolds (IA); Laura Kelly (KS); Janet Mills (ME); Gretchen Whitmer (MI); Michelle Lujan Grisham (NM); Kate Brown (OR); Gina Raimondo (RI); and Kristi Noem (SD). Three of these women (Ivey, Reynolds, and Noem) are Republicans and six (Kelly, Mills, Whitmer, Grisham, Brown, and Raimondo) are Democrats. Raimondo has been nominated to serve in President Joe Biden’s cabinet. If she is confirmed, she will resign as governor. For information about all women governors in the nation’s history, please view the Center on American Women and Politics fact sheet on women governors here. 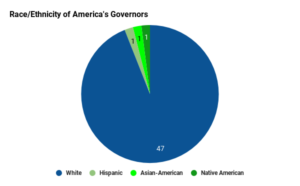 Forty-seven of the nation’s governors are white. Michelle Lujan Grisham (D-NM) is Hispanic and David Ige (D-HI) is Asian. Kevin Stitt (R-OK) is a member of the Cherokee Nation.

*Note: Governors who have not declared a specific religious denomination have been categorized as “no religion listed.” This does not necessarily indicate that they are agnostic or atheist.

Seven governors have served in the Armed Forces. 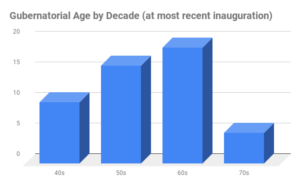 (age at most recent inauguration/swearing in) 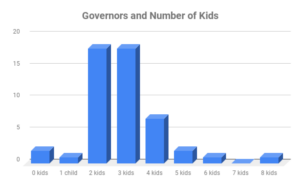 The nation’s governors bring a variety of past professional experiences with them into the office. Many have served in the legislative branch of state and federal government, as well as in a variety of executive positions.

*Note: Eric Holcomb (R-IN) was appointed lieutenant governor under then-Governor Mike Pence (R) when the previous lieutenant governor resigned to take another position. Holcomb was never elected to the position, instead running for governor in 2016 when Pence chose to run for Vice President of the United States rather than a second term as governor.

10 no prior elective office

13 not born in the state they now lead
1 born outside the United States (Kate Brown, D-OR; born in Spain) 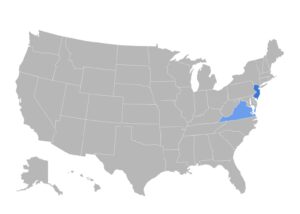 Both of the governorships up this year are currently held by Democrats. The New Jersey race will feature incumbent Governor Phil Murphy (D) running for reelection. In Virginia, the governor is limited to one term, leaving Governor Ralph Northam (D) ineligible to run. For more on both races, see our 2021 gubernatorial elections page.