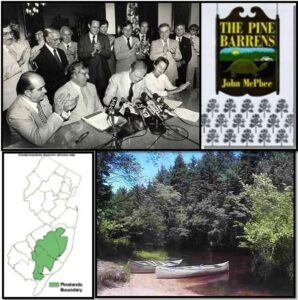 Stretching across southern New Jersey is a vast expanse of protected forest known as the Pinelands. Encompassing nearly 25% of the total land mass in the state, the Pinelands includes portions of seven counties (Atlantic, Burlington, Camden, Cape May, Cumberland, Gloucester, and Ocean) and over 50 municipalities. When Brendan Byrne became governor in 1974, protecting the Pinelands was not a major issue, nor was it something that Byrne himself was advocating. As development of the area increased rapidly, however, and motivated in part by John McPhee’s book The Pine Barrens, Byrne became a champion of protecting the area.

By the end of his second term Byrne declared the Pinelands Preservation Act the single most important accomplishment of his administration, and the issue that is most central to his legacy as governor. Below is more information about the history, politics and people who together protected one of New Jersey’s greatest treasures: