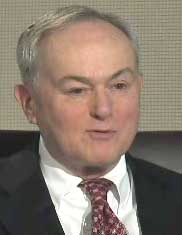 Excerpts of the transcript of an interview with Chief Justice James R. Zazzali (NJ Attorney General 1981-82; Associate Justice 2000-06 and Chief Justice 2006-07, NJ Supreme Court) conducted by Don Linky for the Eagleton Center on the American Governor on December 14, 2009. The full interview is available in the Video Library.

Donald Linky: What were some of the key matters or issues that you dealt with during those months [in 1981] as attorney general?

James Zazzali: Well, it was a great year . . . [T]here was a questionable union in Atlantic City at the time, and I’m being polite and understated when I say questionable union that had too much power and was a threat to the integrity of the casino experiment I will call it. It was an unprecedented effort but we filed an action against that union to enjoin the officers of that union from holding office on the basis that it violated the Casino Control Act because of their backgrounds. We’ll leave it at that. Amidst much skepticism on the one hand and criticism on the other we succeeded; skepticism because it was felt that the courts would not uphold this effort. I thought that at the end of the day I would win somewhere along the line with finality and we did; and criticism because as a labor person still then and now committed to the trade union movement, it was perceived by some narrow minds, if I can say that as being a betrayal of the movement. I didn’t see it that way at all but it did meet with criticism there. I mean I certainly did the basic stuff, the crime on the street problems, the organized crime issues, the casino threats, et cetera, et cetera. We focused on all of that but I felt that the job was more than a Dick Tracy job. It was more than law enforcement and it is because besides the Division of Criminal Justice we had then 400 or 500 attorneys doing the work of defending the state and pursuing matters on behalf of the state.

Q: Skipping back a little bit let me push you to the initial Atlantic City casino referendums. Brendan Byrne came out for the second one, which restricted casino gambling to Atlantic City. The first one was more of a broad-based referendum that was defeated. How did you feel personally about casino gambling in New Jersey?

James Zazzali: My own reaction was, wow you’re going back a long time, I think basic reaction was one of indifference with a toe towards who needs it? I wasn’t crazy about it but I think time vindicated the decision. It’s done a lot for that area of the state.

Q: In fact, Dick Leone as state treasurer and Bill Hyland as attorney general opposed casino gambling and in other interviews we’ve heard that they offered to resign because they felt so strongly about it but Governor Byrne rejected their resignations.

James Zazzali: I did not know that.