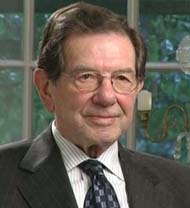 Excerpts from the transcripts of interviews with Albert H. Burstein (State Assemblyman 1971-81; Assembly Majority Leader 1978-79; Commissioner of NJ Election Law Enforcement Commission 2004-10) conducted by Donald Linky for the Eagleton Center on the American Governor on May 16, 2006 and June 6, 2006. The full interviews are available in the Video Library.

Donald Linky: What about Atlantic City?

Albert Burstein: That is clearly a mixed bag. There is little doubt that Atlantic City was in severe decline when the whole issue of establishing a gambling jurisdiction here came into play. Being in severe decline and tying that into the fact that New Jersey ‘s tourism industry was one of its largest, if not the largest, source of income for the state made it something that we just couldn’t turn our backs on. The idea that establishment of the gambling industry in Atlantic City would have a ripple effect so that the surrounding areas within the city itself would be benefited has had less of a consequence. There are areas that I’ve seen down in Atlantic City where there is new housing that’s been put in as a result of the establishment of the casinos but it’s in relatively limited areas. What more recently has been the subject of some scrutiny is the fact that the suburban areas outside of Atlantic City, like Egg Harbor Township and places of that sort that are on the circumference of the city areas, have grown tremendously. So that there is little question but that it has had a beneficial economic effect in those parts of the state. On a whole, if you had to take a look and create some kind of a balance, I would say that it’s a better than 50/50 achievement for the state.

Q: Maybe we’ll get back in more detail a little bit later but were there mistakes made in the ’70s, for example when we dealt with how to structure the Atlantic City referendum and deal with the obvious growth that would result from the approval of casino gambling that have sort of impacted us today and how far the city has come in terms of its renovation?

Albert Burstein: I think that, as I recall, there was a certain percentage of gross income realized by the gambling casinos that was allocated into a separate fund for developmental purposes. But that was not only, as I recall it, for Atlantic City alone but also was usable in other urban areas throughout the state. I think that perhaps if there had been a more stringent set of guidelines and standards and perhaps even a greater percentage of money to come out of that particular fund that we could have done a lot more, again not only in Atlantic City but in places, in urban areas like Camden and Newark which really needed it and to this day need it. So there probably were certain mistakes made but, on the other hand, as I speak about that subject, it wasn’t easy to get the Atlantic City Development Authority and the various bills that were a part of that total package for establishment of gambling in Atlantic City . It wasn’t easy to get that through the legislature. There had to be some sweeteners that were associated with it to bring the industry into an area where they had never been before. I think that looking at the matter in retrospect, while I would, in the ideal sense, have thought it should have perhaps had more of a focus on developmental issues nonetheless was kind of a compromise with the need to get the gambling operators into the city.

Q: Was it a mistake not to tie the state casino referendum to some regional or state commission, similar to the Meadowlands Commission?

Albert Burstein: I don’t know that that was a mistake. As I say, the politics of getting that bill through were rather complex and if you went on to the core issue of establishing the Gambling Casino Authority and whatever other mechanisms went along with gambling in Atlantic City would have created more problems then it solved.