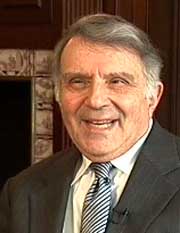 Excerpts from the transcript of an interview with Justice Alan Handler (Counsel to Governor Byrne 1976-77; Associate Justice for NJ Supreme Court 1977-99) conducted by Michael Aron for the Eagleton Center on the American Governor on April 4, 2006. The full interview is available in the Video Library.

Michael Aron: Let me run through some of the other issue areas that are often associated with Brendan Byrne and get you to give us your thoughts on them. Let me start with casino gambling in Atlantic City . You refer to that in your resignation letter. Were you involved in that issue? How do you see him in relation to that issue?

Alan Handler: At that time, the issue was a dramatic issue and it was controversial. I think both arose because of the inevitable moral discourse that organized gambling or state sanctioned gambling you know, would occasion and there were many who felt that those implications or drawbacks as they saw them had to be given weight and really were perhaps more important than seeing this as an activity that would become an important revenue source, an economic benefit to the state. I never felt that Brendan had a serious problem with it in any personal sense, and this is just my total speculation. I never had a long talk with Brendan about it because I think the commitment was pretty much in place. But Brendan, I think, has always been a very open, tolerant person. And I don’t think while he might not personally approve of gambling and the like, I don’t think he was you know, judgmental about people who gambled or wanted to gamble. He figured that was an aspect, a dimension of human nature and you know, so be it. So he didn’t approach the problem as though he really had to square any real moral complications, but he was very much concerned about some of the implications. The practical, real implications that gambling might engender. The most obvious one, of course, would be its attraction to you know, criminal activity and other unsavory activity and the like, and he felt that that could be addressed and had to be addressed in terms of how the gambling was structured and supervised.

Q: So we set up a system much more strict than what they had in Las Vegas at the time.

Q: And I guess we’ve relaxed it somewhat over the years. Something– It’s overly restrictive? Do you have a view on that?

Alan Handler: I’m not sure. I think it was needed.

Q: You set up the Casino Control Commission, but we also set up a Division of Gaming Enforcement.

Q: That would bring cases before the Casino Control Commission.

Q: We were real careful.

Alan Handler: I think it was born of the fact that no one could fully predict or fully analyze the extent of the threat of you know, of criminality creeping into gambling and I think in the Governor’s mind that was the foremost vulnerability to the proposition for gambling. And therefore, he thought that at the very outset, it was something that had to be addressed and could be addressed.

Q: And was the reason for promoting it to get some more revenue into the state coffers or to salvage Atlantic City and renovate Atlantic City?

Alan Handler: My own view was that it was– The primary goal or objective was to rehabilitate Atlantic City . I think that was more or less what was expressed as the reason for it. In other words, there would be other benefits to the state in terms of increased tourism and perhaps some you know, revenue realized by the state. But the dedication of you know, funds to Atlantic City highways was paramount. As a matter of fact, I think that was included in the referendum for the approval of casino gambling. Interestingly enough, that question came before the New Jersey Supreme Court some years later. I think it was in terms of whether the redevelopment authority, the Atlantic City redevelopment authority could use its funds elsewhere and it had regularly used funds statewide, the funds that were realized from casino gambling and the Supreme Court held that that comported with the constitutional referendum. I disagreed with Justice Pollock.

Q: You thought the funding had to stay in Atlantic City?

Alan Handler: I thought it was part of the question that was authorized by the vote to approve casino gambling.