by Don Linky
(Chapter headings are linked to a .pdf document with full text and references. Summary text is provided below.) 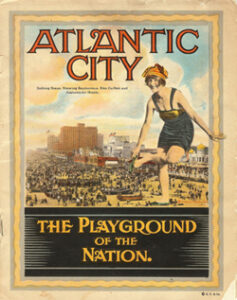 Exploration and Settlement
Emergence of Cape May
Dr. Pitney, the Railroad and the New Resort

Growth of the Machine: Louis “the Commodore” Kuehnle
Rise to Power
Election of 1910: Frank Hague, Woodrow Wilson and Imprisonment

The Farley Era: World War II and Decline
Farley in the Legislature
The Kefauver Committee
Decline and Deterioration
Defeat of the Machine

The island on which Atlantic City would be developed in the mid-nineteenth century. The original inhabitants of Absecon Island, on which Atlantic City rests, were the Lenni-Lenape Indians. The Lenni-Lenapes would travel over the Old Indian Trail from the Mainland to the island to spend the summer months. The trail, which was located approximately where Florida Avenue is today, was five miles long over in late 1670’s. Thomas Budd was an Englishman who was the first recorded owner of Absecon Island. When Budd arrived at Atlantic City, he was given the island and other acreage as settlement of a claim he had against the holders of the royal grant. His mainland property was then valued at $ 0.40 an acre, while the beach land a mere $ 0.04 an acre. That same piece of beach front property today would be worth millions of dollars per acre.

For the next hundred years, the island would be visited by not only the Indians, but also hunters and some of the early mainland settlers. Jeremiah Leeds, born in Leeds Point in 1754, was the first white man to build a permanent structure on the island in 1785. His grandfather had built a cedar log cabin on Baltic Ave. at the site of the recently demolished bus terminal as early as 1783.

The Leeds Plantation grew corn and rye, and raised cattle. A year after Leeds death in 1838, his second wife Millicent got a license to operate a tavern called Aunt Millie’s Boarding House, located at Baltic and Massachusetts Ave. Thus, the first business in Atlantic City was born.

By the year 1850, there were seven permanent dwellings on the island, all but one which were owned by descendants of Jeremiah Leeds. Dr. Jonathan Pitney, a prominent physician who lived in Absecon, felt that the island had much to offer, and even had ideas of making the island a health resort but access to the island had to be improved. Pitney, along with a civil engineer from Philadelphia, Richard Osborne, had the idea to bring the railroad to the island. In 1852, construction began on the Camden-Atlantic City Railroad. On July 5, 1854, the first train arrived from Camden after a grueling 21/2 hour trip, and the invasion of the tourists had begun.

Atlantic City was becoming a bustling seaport, but along with the increasing number of sailing vessels, came an increasing number of tragic wrecks off the coast. One of the most tragic was the sinking of the Powhattan, a vessel carrying 311 German immigrants, which sank on April 16, 1854. For days, bodies washed up on the shoreline. Because it was impossible to identify the dead, 54 bodies were buried in a mass grave in the cemetery at the Smithville Methodist Church, and 45 bodies were buried in Absecon. At the urging of Dr. Pitney, a lighthouse was erected in 1854, and turned on one year later. The lighthouse, in the Inlet section of the city, was originally at the edge of the ocean, but it now stands over 1/2 mile from the beach.

The first official road from the mainland to the island was completed in 1870, after 17 years of construction. The road, which ran from Pleasantville, had a $.30 toll. The first free road was Albany Ave., constructed over the meadows from Pleasantville.

By 1878, one railroad couldn’t handle all the passengers wanting to go to the Shore, so the Narrow Gauge Line to Philadelphia was constructed. At this point massive hotels like the United States and the Surf House, as well as smaller rooming houses, had sprung up all over town. The first commercial hotel, the Belloe House, was located at Massachusetts and Atlantic Ave. and operated from 1853 until 1902. The United States Hotel took up a full city block between Atlantic, Pacific, Delaware, and Maryland (the current site of the Showboat Parking lot). These grand hotels were not only impressive in size, but featured the most updated amenities, and were considered quite luxurious for the time.

In 1870, Alexander Boardman, a conductor on the Atlantic City-Camden Railroad, was asked to think up a way to keep the sand out of the hotels and rail cars. Boardman, along with a hotel owner Jacob Keim, presented an idea to City Council. In 1870, and costing half the town’s tax revenue that year, an eight foot wide wooden foot walk was built from the beach into town. This first Boardwalk, which was taken up during the winter, was replaced with another larger structure in 1880. On June 16, 1880, Atlantic City was formally opened. With fanfare the likes few in the area had seen, a resort was born. On Sunday September 9, 1889, a devastating hurricane hit the island, destroying the boardwalk. Most of the city was under 6 feet of water, and the ocean met the bay at Georgia Ave. By the census of 1900, there were over 27,000 residents in Atlantic City, up from a mere 250 just 45 years before.

The late 1800’s were a growth time for the city. Nearly 2/3rds of the city’s 6,500 dwellings in 1899 were cottages. These cottages were elaborate 2-3 story private homes, many the summer homes of prominent doctors and businessmen from Philadelphia. Beautifully coifed lawns and magnificently decorated interiors made these homes a symbol of the glory days of the city. At the same time, along the boardwalk, amusement piers began popping up. With names like Million Dollar, Steel, Iron, etc., the piers of Atlantic City were a major draw. Everyone could find some sort of entertainment to meet their tastes from the Diving Horse, Dr. Couney’s Premature Infant Exhibit, marathon dance contests, and side show acts. Despite the variety of draws to the city, one issue remained: how to extend the tourist season past summer. That question was answered by a 16 year old girl from Washington in 1921 who was the first Miss America. The pageant, which was held intermittently from 1930-1935, became synonymous with Atlantic City when it began being held at the Convention Hall in 1940.

Atlantic City became “the” place to go. Entertainers from vaudeville to Hollywood graced the stages of the piers. Atlantic City’s future seemed bright up until World War II. After the war, the public seemed to stop its love affair with ‘The World’s Favorite Playground’. Possibly because of the public’s access to national air travel, the shift of the population westward, the general deterioration of the city, or a shift in the public’s taste for more sophisticated entertainment, Atlantic City lost much of its shine; and most of its tourists.

With the passage of the Casino Gambling Referendum in 1976, Atlantic City began an upward battle, not unlike one it had started two hundred years before, to use the glorious resources it has been given by nature, to make it once again a world renowned tourist Mecca.