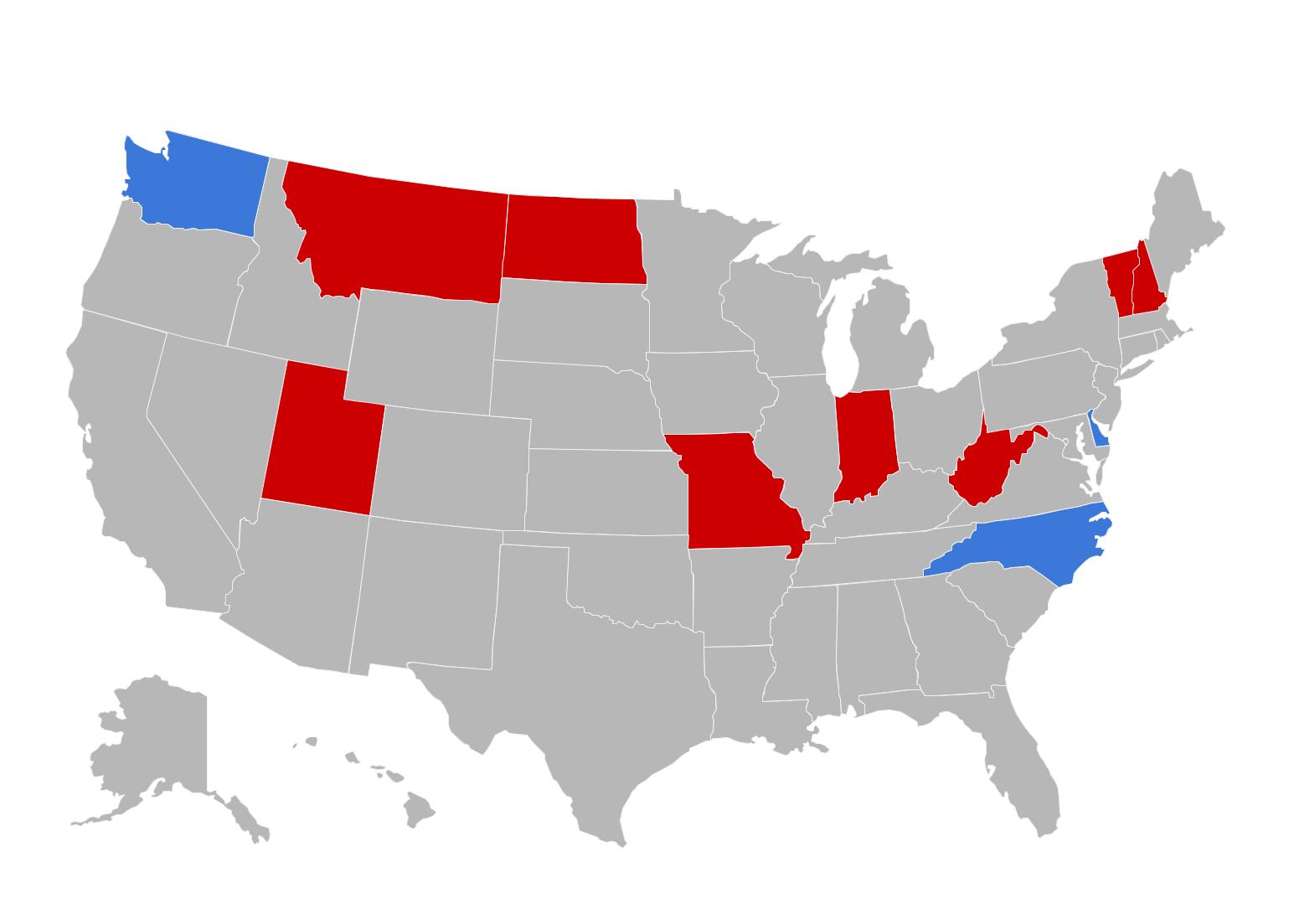 There were eleven gubernatorial races in 2020 and the overall theme was status quo. Nine of the eleven races featured incumbents running for re-election—and all 9 incumbents won. Two states, Montana and Utah, held races for open seats. In Utah, Republicans easily held onto the seat, with Lieutenant Governor Spencer Cox (R) comfortably winning the race to succeed retiring Governor Gary Herbert (R). The only seat to change party was in Montana, where Representative Greg Gianforte (R) defeated Lieutenant Governor Mike Cooney (D) to take over for the term-limited Governor Steve Bullock (D). With that lone pickup, Republicans now hold 27 of the nation’s governorships, with Democrats holding 23.

Incumbent Governor John Carney (D) easily won a second term as governor, defeating attorney Julianne Murray. Carney previously served as lieutenant governor from 2001-2009 and then as a U.S. Representative from 2011 – 2017. Murray was one of three women to win a major party nomination for governor in 2020, and the only Republican woman. A Republican has not been elected governor of Delaware since 1988.

Incumbent Governor Eric Holcomb (R) defeated former State Health Commissioner Woody Myers (D) to win a second term as governor. Holcomb also faced a challenge from Libertarian Donald Rainwater, but won easily, with 56.6% of the vote to Myers’s 32% and Rainwater’s 11.1%. Holcomb was first elected governor of Indiana in 2016. He was originally the incumbent Governor Mike Pence’s (R) running mate in that race, but when Pence withdrew to accept the Republican nomination for vice president, Holcomb successfully ran for governor in his place.

Incumbent Governor Mike Parson (R) defeated State Auditor Nicole Galloway (D) to win his first full term as Missouri governor. Parson became governor of Missouri in June 2018 after then-Governor Eric Greitens (R) resigned. He had been serving as Greitens’s lieutenant governor, elected in 2016. Parson also has experience in the state senate, state house of representatives, and as a county sheriff. While the race tightened in polls in early October, Parson pulled away late in the race and won with 57.7% of the vote.

With incumbent Governor Steve Bullock (D) ineligible to run for a third term due to term limits, Montana was one of only two races to feature an open seat this year. It was also the only state to change parties. In one of the most closely-watched races of the cycle, U.S. Representative Greg Gianforte (R) picked up the seat for the Republicans, defeating Lieutenant Governor Mike Cooney (D) 54.4%-41.6%.

As one of two states with a 2-year gubernatorial election cycle, it is almost always gubernatorial election season in New Hampshire. Incumbent Governor Chris Sununu (R) easily won a third two-year term, defeating state Senate Majority Leader Dan Feltes (D) 65.2%-33.4%. New Hampshire was one of three states in 2020 to split its vote between president and governor, voting for President-Elect Joe Biden (D) for president while re-electing the Republican Sununu as governor. (Note that those three states include North Carolina, where President Donald Trump (R) leads the vote, but the state has not been officially called; North Carolina re-elected Governor Roy Cooper (D).)

Along with Montana, North Carolina was one of the most closely scrutinized gubernatorial races of the year. Unlike Montana, the North Carolina seat was not open; incumbent Governor Roy Cooper (D) ran for–and won–a second term, defeating incumbent Lieutenant Governor Dan Forest(R). Cooper won by a 51.5%-47.1% margin, a significantly larger margin than his close victory in 2016. As in 2016, North Carolina appears to have split its vote in 2020. While the presidential race has not yet been called in the state, it appears that the state voted to re-elect both Republican President Donald Trump and Democratic Governor Cooper.

Incumbent Governor Doug Burgum easily won re-election in the state over veterinarian Shelley Lenz (D-NPL). Burgum was first elected governor of North Dakota in 2016 and will now serve a second term. Lenz was one of three women to win major party nominations for governor in 2020.

Utah was the second state—along with Montana—to feature an open seat governor’s race in 2020. While Utah does not have gubernatorial term limits, incumbent Governor Gary Herbert (R) announced that he would not seek a third full term. After winning a closely contested Republican primary, however, Lieutenant Governor Spencer Cox (R) was a heavy favorite to succeed Herbert, Indeed, in a race that received some national attention for its civility, Cox comfortably defeated Professor Chris Peterson (D).

The Washington gubernatorial race lost much of its intrigue in August 2019 when incumbent Governor Jay Inslee (D) announced that he was dropping out of the 2020 presidential race and would instead seek a third term as governor of Washington. As expected, Inslee easily won that third term, defeating Loren Culp, the police chief of the Town of Republic.

Incumbent Governor Jim Justice (R) easily defeated Kanawha County Commissioner Ben Salango (D) to win a second term as West Virginia’s governor. Justice first won the West Virginia governorship in 2016—as a Democrat. In August 2017, however, Justice announced that he was switching to the Republican Party, or more accurately switching back. He had been a registered Republican prior to 2015, when he changed to the Democratic Party before launching his gubernatorial run. Justice ran for–and won–reelection in 2020 as a Republican.